What if evil hijacked your youth and held you captive for years and years? When escape to a new life was finally achieved, you would vow to stay as far away from your former captors as possible, right?

Maybe you would choose to return and “conquer evil by doing good.” (Romans 12.21) 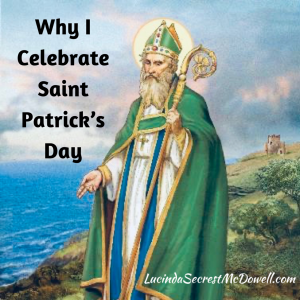 Patrick was a sixteen-year-old teenager when he was abducted. There were no milk cartons broadcasting his disappearance, no organizations rescuing young people from human trafficking, no Amber alerts. He was on his own among a fierce pagan people.

He was now a slave, far from home.

The land was lush and beautiful. But the people were themselves enslaved to superstition, spirits and fear. Violence was common and life was cheap. In this alien land, Patrick grew up quickly as slave to an Irish Chieftain.

When there was time to be lonely and homesick among his heathen captors, Patrick found solace in God and converted to Christianity. He drew close to Him through nature, silence and prayer. One evening he felt God’s Spirit was prompting him to go to the shore two hundred miles away. There he discovered a boat which he immediately took as God’s provision for his escape.

After six long years he was finally free and able to pursue a new life! With a deepened, faith, he pursued ordination in the church and continued a vital ministry in Roman Britain. But the land that first captured him, now captured his heart.

He longed to return to Ireland. Patrick had become convinced that he was handpicked by God to convert the entire country to Christianity.

Patrick greatly respected nature, but he also wanted the Irish to know that God was the only One worthy of worship. So he used a shamrock to explain the three persons of the Trinity — God the Father, God the Son, and God the Holy Spirit — one stem but three leaves.

Patrick labored in Ireland for thirty years and even though some say he singlehandedly converted Ireland, Patrick preferred to put it this way: “I owe it to God’s grace that so many people should, through me, become Christians.”

He loved the Irish and they loved him back, perpetuating many legends about his life and ministry. When this Briton born as Patricius died at age 75, he was named Patrick, patron saint of Ireland.

And neither Ireland nor Christianity was ever quite the same.

The following prayer is commonly known as St. Patrick’s Breastplate, found in the ancient Book of Armagh, from the early ninth century. Patrick is said to have written this prayer to strengthen himself with God’s protection as he prepared to confront and convert Loegaire, high king of Ireland.

We may not wear combat gear in our daily lives, but St. Patrick’s Breastplate can function as divine armor for protection against spiritual adversity. Where do you need to conquer evil by doing good? Ask God and He will reveal to you His battle plans for your own life.

(Author’s note: Whenever I pray this prayer, I have to stand and raise my right hand as though holding a sword. Then I proclaim with great conviction “I arise today…” I have not condensed it here.)

Check out my new companion devotional book “Life-Giving Choices – 60 Days to What Matters Most” by Lucinda Secrest McDowell Order Today!